Today, I want to tell you the story of Charles W Morgan.
Mr Morgan lived in the United States during the early 19th century and was a successful entrepreneur and investor. He was active in the energy market. Or, as it was better known in the day: whale hunting.

It’s no exaggeration to say that at the time, the whole world was lit by whale oil. It fuelled most of the oil lamps. It was also used to produce the superior spermaceti candles – sturdier candles that burned brighter and with less smell than those from animal fat or beeswax.

We can still trace the dominance of the whale oil candles via the candela, widely used base unit for luminous intensity, which was originally based on the brightness of a single spermaceti candle. When Charles Morgan got involved in whaling, it was an industry that had been growing for over five decades. It being very lucrative, the government had gotten involved decades ago and regulated most of the important aspects of whaling; it was a highly regulated industry.

Over time, Morgan built a fleet of seven whaling ships. In 1841, at the height of the whaling industry’s success, he launched an eighth, a 351-ton wooden ship named after – who else – himself.

The Charles W Morgan is the last remaining wooden whaling ship in the world. It took its last whaling voyage in 1921.However, a couple of years later Morgan started to notice the whaling space getting overcrowded – the competition was staggering. He also discovered that whale populations were in decline, making it more expensive to find and catch the deep-sea mammals.

Thus, in 1847 he decided to start selling his whaling ships and diversified into other sectors, such as mining, railroad construction, and banking.

Decline of the whaling industry
Morgan timed his decisions just right, because in 1849 a Canadian geologist distilled an oily substance out of bituminous tar, which he called kerosene. It didn’t take long before the world market switched from lighting their homes with whale oil lamps, to much cheaper kerosene lamps. And in the 1850s, the invention of paraffin, a distillate from petroleum, dealt a devastating blow to the demand for the spermaceti from whales. (Electric light only was invented in 1880.) After decades of strong growth and dominance, the age of whaling pretty much ended in the span of a couple years.

What did the whalers do?
This of course did not mean that all whalers went bankrupt outright. A not insubstantial number of them saw opportunity in the upcoming petroleum industry. Actually, there were quite a few parallels between the two sectors:

And so it’s no surprise that historian Samuel John Mills Eaton made the following comment in 1866:

Many of the old whalemen have thrown aside the tarpaulin and harpoon, and have entered upon the business of selecting [petroleum] sites and locating wells with as much avidity as ever they pursued the monsters of the deep.

Revolution then, revolution now
Today my friends, we are seeing history repeat itself. The old industry of money and banking on the one hand, and brand new monetary technology on the other. Here are some parallels with the 19th century petroleum revolution:

1. The fiat banking industry, intertwined with central banking, has been growing quickly for over five decades, is heavily regulated and has been in a worldwide state of crisis since 2008.

2. Bankers today are also on a hunt for a rare find: yield. Making a return on investment in an environment of ever-increasing inflation and central bank interventions is a risky endeavour, perhaps akin to Captain Ahab hunting for a white whale named Moby Dick.

3. Technologies with vastly higher efficiencies are making waves and are growing at blistering speeds. To illustrate: a couple months ago, a $100m Bitcoin transaction was made, and it:

4. Just like with petroleum in the 19th century, the challenger of the status quo:

In the early days of petroleum, prices were extremely volatile, and would vary from place to place. Over time, infrastructure and market makers made prices more uniform. Features both horrible and super high quality products (‘standard oil’ was named such to indicate a certain standard in quality)

In other words, cryptocurrency entrepreneurs are operating in a wild west environment, just like in the early days of petroleum.

5. Cryptocurrency companies are beginning to snatch away the brightest minds in banking. Just like the whale oil and petroleum industries had similarities, both the bitcoin and the legacy banking industries are dealing with digital currencies – so there are obvious opportunities for bankers who want to create value in the new economy.

Are these intriguing parallels showing us the way forward for the world of money and banking? Are they showing us that Bitcoin is bound to become the new world reserve currency?

We cannot know for sure, but what they do tell us loud and clear is this: don’t take the status quo for granted.

Challenges and opportunities going forward
Let me close with a couple of thoughts on what the challenge and opportunity is here. Basically what we see is that the upcoming cryptographic technologies have taken the game of money and banking to a new level. The old rules apply to an ever smaller extent.

Here is what customers will increasingly demand going forward:

Lending and borrowing brokerage as a separate service. In the absence of a central bank to bail out deposit banks, there is no benefit to increasing the risk of fraud and insolvency by blending these two traditionally independent industries. This is what we already see in bitcoin today 100% predictable monetary policy: men with beards uttering greenspeak don’t cut it anymore, people will want financial systems where they don’t have to trust a secretive, centralised institution Finally people will demand antifragility: they won’t accept a central point of failure. Sure, maybe today they do still, but after the next big banking crisis many of them will change their minds

This is the new reality we live in.
And what an opportunity it represents. For the first time in history, we are able to build a robust and low cost financial system from which the entire world can benefit.

And what an opportunity for the Netherlands. Bitcoin adoption is among the highest in the world right here, and there’s a wealth of entrepreneurial knowledge and creativity ready to take things to the next level.

All the knowledge is present to make this place into the Silicon Valley of money 2.0, into the Hong Kong of 21st century banking.

Just like the Bank of Amsterdam was central for the Dutch golden century, cryptocurrency could be key for a new era of prosperity here in the low lands. So let us not be afraid of this revolution, but instead embrace it. 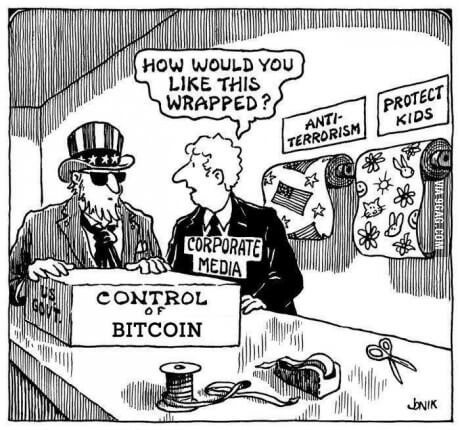