Bitcoin kicked last week off with a rally. Adding about $10 billion in market cap in a matter of minutes. Some exchanges noticed that the currency even climbed above the $7000 mark. 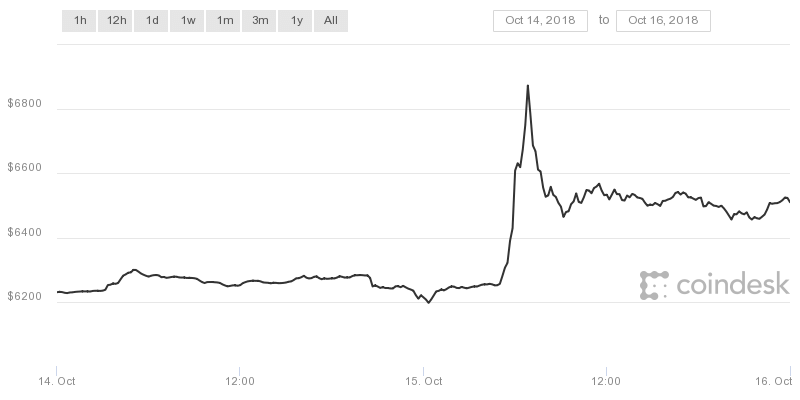 Bitcoin took a huge jump last Monday morning. In a few minutes, the price of the currency had increased by almost 10%.

On some trading platforms where Bitcoin often trades at a premium, the price rocketed above $7000.

The reason for this sudden price move was a sell-off in the dollar-linked cryptocurrency Tether. Traders often own Tether for its stability. When the market offers an opportunity, traders sometimes sell Tether to buy other cryptocurrencies. Pushing the price of Tether down – while boosting the Bitcoin price. On Monday, while traders where pushing the Bitcoin price higher – Tether was down some 3% by a massive sell-off.

The week’s rise in Bitcoin price erased the previous week’s losses. The move indicates a strong resistance just above the $6,000 mark. When it looked like it would fall beneath that level, buyers quickly pushed the price higher. Sharp changes in the price like this one, are often caused by trading bots initiating a buy order that then gets picked up by others, causing a domino effect.

Some market watchers speculated the rise in the bitcoin price could signal a return to form for the Nasdaq stock exchange — which previous week dropped sharply towards the end of the week. Source: Forbes

Bitcoin is looking both fundamentally and technically strong. The currency has bounced ...

Fees, what are they and who’s charging for what?

The sign says “Fee” in swedish. A common sight in Swedish parking lots and garages. H...

Bitcoin investors have had a wild ride over the last week. On Wednesday, the cryptocurr...